HomeOutside KentBBC Use Sensational Headline To Cause Borrowing Worry
Outside Kent

BBC Use Sensational Headline To Cause Borrowing Worry 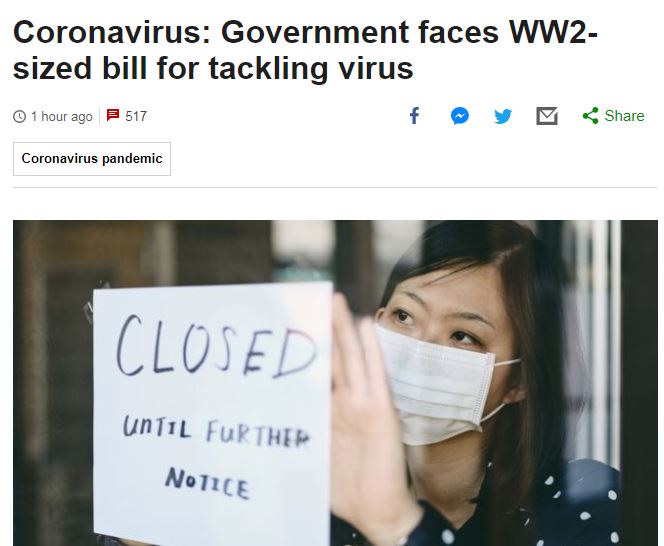 The BBC have released another ‘Coronavirus’ based story to cause more concern amongst business owners and those struggling financially.

The story, published yesterday is completely misleading and is rumoured to be part of a bid to try and get people to return to work. Let’s take a look at some of the article first to see what he BBC say, to see if this is such a problem as the headline states:-

we don’t need sensational writing from the bbc

First of all, anyone reading this heading would assume that the UK has racked up a massive bill, or an equivalent amount as the country spend in the course of World War 2.

The Conservative MP Daniel Kawczynski wrote in 2018 that the “cost of the damage caused to Britain during the war was an incredible £120bn – equivalent to £3,620bn today”.  £3,620bn is a little different from the £123.2bn spent so far during the Coronavirus pandemic.

Let’s not forget that the Coronavirus pandemic has only been going 4-5 months. World War 2 lasted around 6 years!

Ah, but the article has based its calculation around GDP, rather than total spend, so perhaps we are looking at it the wrong way – even though the headline would suggest the “bill” was reflective of the total amount of money spent.

So what is GDP? The correct definition of GDP is “the monetary value of all finished goods and services made within a country during a specific period. GDP provides an economic snapshot of a country, used to estimate the size of an economy and growth rate. GDP can be calculated in three ways, using expenditures, production, or incomes”.

Could the BBC report still be misleading? If you think about it, the UK’s economy (and GDP) has taken a massive hit during the last 3 months as manufacturing has virtually ground to a halt, along with a lot of other businesses. So GDP has fallen a lot. So for the BBC to say that borrowing will be equal to 15.2% of the UK economy, is using a low number to start with.

During WW2 manufacturing was at a high, as factories churned out military hardware, ammunition and many other items. So GDP was high during WW2, so the 22% quoted in the report is taking 22% of a large number! So you can see that borrowing during WW2 was much higher.

So whilst the UK is going to take a massive financial hit this year, one that we will all ultimately end up paying for over the long-term, can this really be compared with WW2? We think not. If Coronavirus goes on for another 2 or 3 years then perhaps, but we are not even close. GDP has take a bit hit, but this is a very short-term variation counted in months, not years.

People have enough to worry about and this kind of reporting is not what people want to read. BBC – give us informative articles, but compare apples with apples, not apples with grapes!