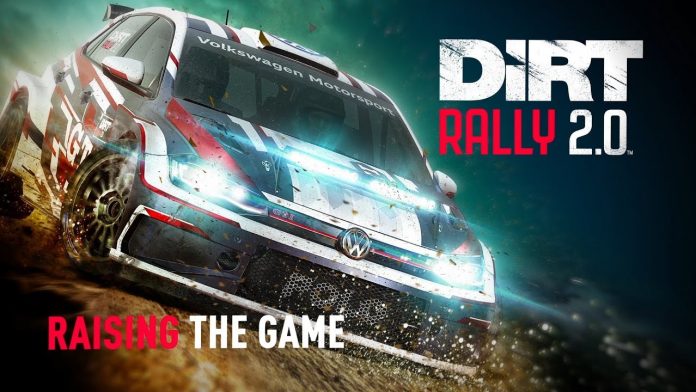 Dirt Rally 2.0 is Codemasters sequel to the similarly named, Dirt Rally 1. If you are unsure as to what this game is about, let us explain – its a rally game.

But do not be fooled into thinking this game it is only about rallying, as it also includes some fun Rallycross too. In fact, the Rallycross can actually be more enjoyable than the main event, as you find yourself jostling with 4 other rivals. If you haven’t been left in their dust!

The game ships with a reasonable number of rally events and each one comes with about 12 stages, although some are mirrored versions which reduces the actual number. The stages range from around 3 miles up to around 10 miles in length, so you have a reasonable amount of time driving each one without burning off the outer layer of your eyeballs. The stages can also be adjusted with different weather settings, so can vary from dry to almost flooded, but once again there is no variation in the weather dynamics. So rain will be constant rain at the same rate from start to finish. Plus the stage start time remains fixed. That’s just lazy.

Dirt Rally 2.0 can become a massive game – but does rely on DLC

The cars can be adjusted to suit each stage but you can just jump straight in if you feel confident. Good luck with that as you will be lucky to complete your first stage without hitting a tree. This game is very difficult and it will not help you. Pick the wrong tyres for a stage or forget to change to wet tyres and your co-driver will just sit and spout out the same list of instructions. We have never driven in a real rally, so we cannot say if the driving is as difficult as the real thing – but trust us, this game will frustrate you. The good news is that Codemasters allow you the ability to adjust the AI skill level. So if you bring it down to 60-70% you may actually stand a chance of coming 19th out of 20.

This is definitely a game that will take a while to master – but it will reward you for your hours of practice. The first time you manage to complete a stage without smashing your car into a tree will have you smiling from ear to ear – but you will know inside that you could have gone faster. This is where this game excels, as you keep trying to improve your stage times.

The Rallycross is also really enjoyable, in a sadistic kind of way. There are a number of different circuits available and you compete in qualifying races to set the best time. If you are fast enough, you will qualify for the finals. The AI cars are quite fierce and will tap you into a spin if you get in their way, although it is fun to nudge them back. The tracks are really slippery, which can be annoying but also rewarding, when you manage to drift sideways around a long bend. Joker laps have been implemented too, so you can see yourself being overtaken by everyone else on the very last corner.

If you are not keen on racing against others online, the game comes into its own as it allows you to create custom offline events. Fancy creating your own rally made up of a number of different stages? You can. Want to make a custom Rallycross event? Go for it. The only thing you cannot change is the number of AI competitors or the drivers names.

So is there anything bad about Dirt Rally 2.0? Yes and for us it is a big yes. Our biggest gripe with this game is that you must be online in order to access half of the game. When you first load the game, it connects to online servers to authenticate your install. If the authentication fails, it locks you out of the career mode and the challenges. When we first purchased the game, there was an issue with Codemasters servers, so we were unable to play the game in full. It also makes us worry what will happen once Codemasters decide to stop supporting this game. Will we be unable to play it? This is a massive issue for us as after paying our money, we expect to be able to play our game, no matter if we are online or not. This is especially true if you have invested a lot of money in the extra DLCs.

This is the other area that has upset some fans – the amount of DLC. There is plenty of additional cars and locations to choose from, but each will cost you extra money. Some may see it as bonus material, but others view it as a way to keep the base game stripped back and then charge for the rest of it. If you decide to purchase everything at full price, then you are a bit of a muppet. A very poor muppet too! Look around for the sales and you can purchase ‘season’ packs which bulk items together at a reduced price.

The game is incredibly hard and will drive you mad trying to compete at the harder difficulties. We do advise that you use a steering wheel and pedals if you want to stand a chance of setting decent times. The game can also be a little slow to load due to its ‘online’ nature and the repetitive ‘cut scenes’ before and after each stage or race become boring after a while – sadly you cannot turn them off. There is a huge amount of potential with this game and we applaud the customisation options available.

The biggest issue for us is the online activation, which we detest with a passion. The game is growing on us since our first outing where we hurtled off the track and into a large tree and we will be returning to the game now we have caught the ‘rally bug’. You will have to decide if you want to invest your money in a game which you may not be able to play fully if your broadband is down or in a few years time.