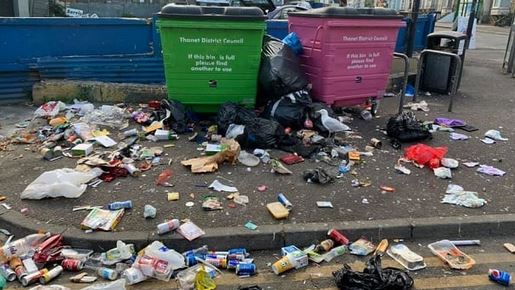 The latest official Government figures for waste and recycling in England show just 1.5% of Kent’s rubbish goes to landfill. The rest of it has probably blown down a street near you as a result of overflowing bins.

The Department for Environment, Food and Rural Affairs report of waste and recycling statistics for 2019/20 found KCC disposed of 670,000 tonnes of household waste. According to the statistics, of that, 315,000 tonnes of waste was recycled and 345,000 tonnes was used to produce energy. What happened to that ‘energy’ is anyones guess!

KCC Cabinet Member for Environment Susan Carey said: “Our use of landfill remains one of the very lowest in England at 1.5%, the national average being at 8.5%.

“Certain items must by law be deep buried so we always dispose of asbestos in landfill. Corpses of large marine mammals such as dolphins, seals and whales must also be buried but we work hard to ensure that everything else is recycled or turned into energy. So we are now being denied whale steaks too?

She also said ““I’d like to congratulate Tonbridge and Malling Borough Council. The DEFRA figures show that their residents had the highest improvement in kerbside recycling performance in the country. Well done as well to residents in Tunbridge Wells Borough who increased their recycling to just over 50%.”

That is incredible considering that Tonbridge and Malling waste collections are never on time. Rubbish such as cardboard is allowed to be scattered across the streets on a windy day due to the council providing stupidly small plastic boxes with no lids.

Kent’s use of landfill remains one of the very lowest in England at 1.5%, the national average being at 8.5%

Only last weekend there were over 20 volunteer litter pickers, clearing up the rubbish that was strewn along the A20 and all the way up Wrotham Hill. It looked like someone had just emptied a bin lorry by the side of the road and left the rubbish to mingle with the hedgerows and wild rabbits.

Susan added: “It is our goal to create a circular economy so that waste from Kent is processed here in Kent.“We recently announced that all 45,000 tonnes of food waste collected annually from Kent households will be turned into biogas at a new anaerobic digester at Blaise Farm Quarry near Kings Hill and that 15,000 tonnes of paper and cardboard a year will be recycled through DS Smith’s Paper Mill in Kemsley.”