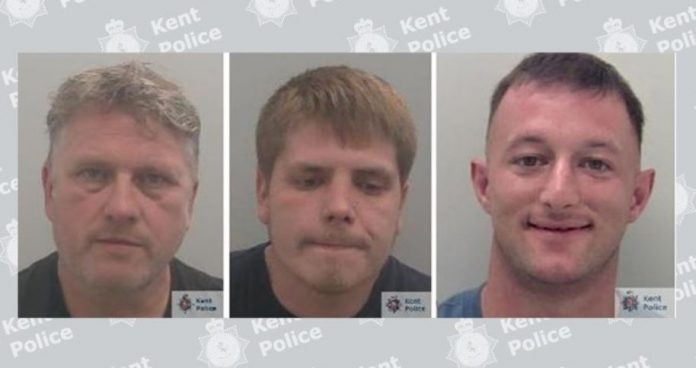 Four men have been jailed for the violent incident which resulted in a victim being punched and knocked unconscious before the group fled.

The assault happened in front of terrified families at a caravan park in Eastchurch. Jason Taylor Snr, Oliver Taylor, Carl Allam and Jason Taylor Jnr were all jailed for the violent altercation.

The incident happened after an argument broke out outside one of the caravans. Following this the group attended the front counter at the caravan park where Taylor Jnr started to attack a man in his 60s while holding a machete.

During the disturbance Allam, 31, of Coldharbour Lane, Kemsley, used a large Katana bladed knife to scare off the victim’s family and members of the public by waving the knife at them. Oliver Taylor, 25, of Canterbury Road, Sittingbourne, then used a baseball bat where he inflicted further head injuries to the victim.

The three men then surrounded the victim where he was punched in the face knocking him unconscious. They then fled the scene leaving the victim on the floor and continued to shout at other people in the park on their way out.

After the incident, the man was taken to a local hospital where he was treated for his injuries and has since recovered.

Following a police investigation, all four men were arrested and later charged with one count each of violent disorder. They each admitted the charges and were jailed on Tuesday 31th August 2021 at Maidstone Crown Court.

Jason Taylor Jnr was jailed for two years and seven months while his father, 50, of Mountview, Borden, was handed a two year and six-month sentence. Carl Allam and Oliver Taylor were both sentenced to two years and five months in jail.