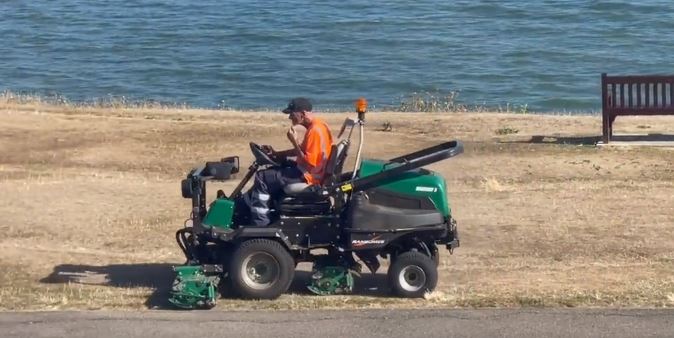 A Kent resident has taken to social media to complain at the council for attempting to mow the grass during the hottest period since 1976.

The person living in Tankerton said they were ‘speechless’ after spotting the sit-on lawnmower trying to cut a grass verge on the seafront. They were also joined by another person with a large petrol strimmer.

The person said ‘They are mowing & strimming the bare ground. This is bonkers & a waste of £££’s’.

Another person agreed that it was a pointless exercise considering the grass is flatter than an overcooked pancake. They also mentioned that it was not good for the insects if the grass verges are no higher than a few millimetres tall ‘it’s human interference i.e. constant bloody mowing, even in a drought when the grass is brown and crispy!’

The council are yet to comment on the mowing issue, but it is thought that the problem relates to council contracts, where they have to maintain the verges on a recurring number of weeks schedule, no matter if they need attention or not.

The council also have a duty to keep the streets looking tidy and would still have to pay staff wages anyway. It keeps these people in work and they probably could not be reassigned to another department.