HomeOutside KentGrowing Calls To Cease Donations To The RNLI
Outside Kent 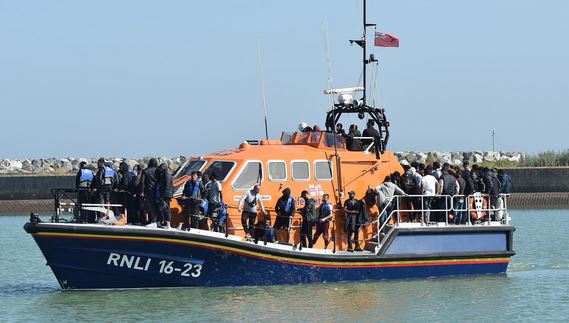 In the midst of the migrant crisis, there are growing calls for people to stop donating to the service. The RNLI has been trending again for all the wrong reasons.

The RNLI have been accused of being a ‘taxi service’ to bring migrants to shore in Kent from the Channel. On a near daily basis, RNLI vessels have been heading out to retrieve hundreds of people in danger.

The RNLI insist that their role is to ‘save lives at sea’ and that all human life is valuable no matter where the people originate from. But questions are being asked if the people are actually in danger and need saving or if the RNLI is just making the journey that little bit easier.

People have taken to social media to vent their disgust at the ongoing situation. Those that felt the RNLI were ‘stuck between a rock and a hard place’ may have been patient, but now even those are becoming frustrated at the lack of any change.

For some that could spare a few pound, they were always happy to donate to the RNLI cause. It has always been an institute of our society and as the majority of staff are volunteers, they have always had our admiration for their bravery. A supporter for the RNLI mentioned that they felt sorry for the volunteers and the volunteers employers, as these people must be out at sea all the time instead of working.

How come the RNLI is not facing huge fines for people trafficking like lorry drivers were?

But now, it would appear enough is enough as there is a growing current of discontent. UK Home Secretary Priti Patel has recently announced that she will try and turn the dinghies around. This sounds more like a recipe for a disaster and could mean the RNLI will be required more than ever.

One critic has suggested that as the migrants can pay the people traffickers up to £5,000 per person for the crossing, the migrants may as well pay the money directly to the RNLI. At least the RNLI make some money and the migrant gets a safe crossing. It’s not a bad suggestion!

Another person added “We’re all delighted to pay 1.5% more tax so that you can stay in a gorgeous 4* hotel, get 3 meals a day & be treated to our amazing NHS. Just thank the RNLI taxi service”.

One final chap said “Just informed the RNLI – they have had my last donation. Trafficking is illegal”.

But it is not all doom for the lifeboat service as they still have some support on their side. One said “thanks to the RNLI we have a volunteer organisation set up to help those in danger on our seas”.