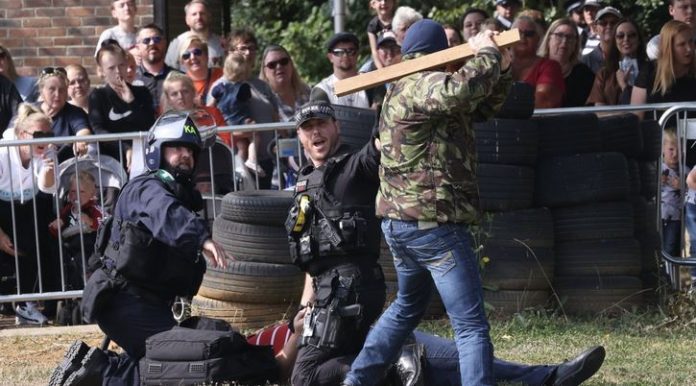 Families attended the fun day held at the Kent Police Training College in Coverdale Avenue and were able to get closer to their police force as they were given the chance to see taser gun demos, hostage rescues and police dog shows.

Chief Constable Alan Pughsley said staging events like this doesn’t come cheap but is chiefly funded through seizing the proceeds of crime that helped make this open day free for the public. Who says that crime doesn’t pay?

There was plenty of activities to see for all ages and any wannabe criminals were treated to educational demonstrations of attacking people with planks of wood and shown how to break in to houses via patio doors.

Families were told they would have to bring their own food and alcohol was banned for the event to prevent any trouble. Hot drinks were also prohibited thanks to some strict health and safety rules, but luckily it was so hot that the majority wanted cold drinks with ice!

There were some dog handling demonstrations, people wearing costumes for the smaller children and even a sand pit where you could uncover buried bones as part of a CSI investigation. There was even a visit from the police helicopter, so that visitors could see it up close.

Overall, it was a very successful day and has given any budding criminals a good insight as to what they are up against!