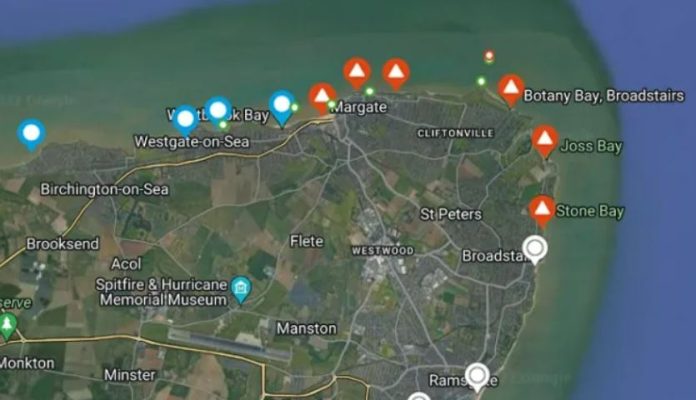 Kent Wildlife Trust have said that says volunteers were forced to cancel a wildlife survey on 16-17th November, after Southern Water waste releases into the coast at Margate and Fulsam Rock would put them at risk.

Southern Water discharges were made from both the short and long sea outfall pipes and pumped into the sea off the coast of Margate following heavy rainfall.

The Shoresearch survey was due to take place on Friday, 18th November at Fulsam Rock but conservationists at Kent Wildlife Trust had to stand volunteers down after a risk assessment deemed that the sewage discharge would have put them at significant risk.

The cancellation of the event was disappointing for organiser, Marine Conservationist Sherece Thompson of Kent Wildlife Trust, who said ‘There is a huge amount of work that goes into survey days and the data that the volunteers collect and collate is extremely important, however we simply could not risk people’s health and were forced to cancel’.

A Southern Water spokesperson said ‘Due to a technical fault on the night of Wednesday 16th November, the pumps at Margate Wastewater Treatment Works briefly stopped working. We also experienced extremely heavy rain – 31mm of rain falling in just 12 hours at that location – at the same time, leading to volumes of surface water entering the sewage and drainage system locally’.

Feargal Sharkey responded to the news of the volunteers being stood down. ‘Is this really the kind of world we want to create for our children?’ he asked.