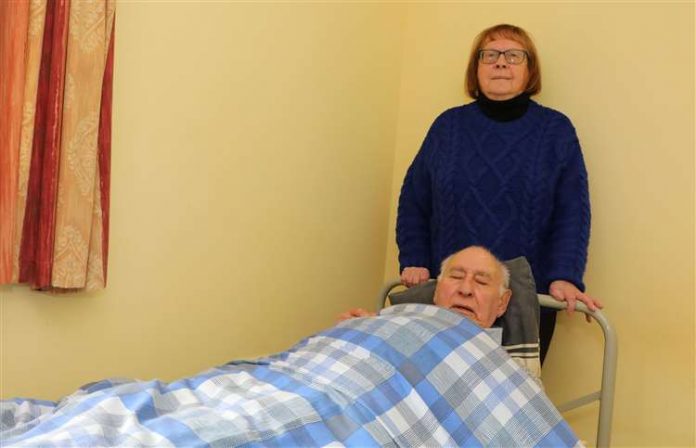 One article we had to share with our readers today is the sensational story of Beryl and Malcolm Deacon from Ashford who spent Christmas 2019 without any beds. Originally reported by KentOnline, this particular story has grabbed the attention of its readers on what must be a very slow news day.

The story goes that the intrepid couple purchased two single beds from Benson Beds for delivery on 23rd December. They moved into their new home / flat / squat just recently and used a metal ‘army’ bed they borrowed from their son until their new beds arrived.

At the time of writing, we are not sure if they had an army bed each or had to snuggle up in a single one – but at least they would have kept each other warm.

who was really at fault here, the shop or the couple?

The son had guests to stay for Christmas, so decided to reclaim the bed for his friends stayed over for the festive period. Can you hear the alarm bells going off already?

Now by this point, you are probably expecting to read a story where the delivery van did not turn up with the new beds….but you would be wrong. The van did indeed turn up, but could not get the beds up a narrow staircase. Not only that but the story continues …’they allegedly caused damage to the wall plastering, before giving up and putting the beds back into the truck’.

The photo definitely shows damage to the wall, but was it done during the bed delivery? We don’t know! Mr Deacon, 85, said: “They took out part of the wall going up the stairs”. A little bit of filler should recitify that particular issue.

As the beds could not be installed, the delivery people left, leaving poor Mr & Mrs Deacon without a bed. Their son then decided to become Mr Scrooge of Christmas and left his Mum and Dad to sleep on the floor, as he only returned the army bed once his guests had left after Chrtistmas What a top chap!

Mr & Mrs Deacon are now able to select some beds that will actually fit their new home, but so far they have not responded to the offer from the shop. The army bed must be more comforable than they are letting on! Luckily KentOnline managed to get a fab photo of Mr Deacon looking ever-so-cosy in the army bed, so it’s not all bad news. Maybe Mrs Deacon has handcuffed him to it, so she can deal with him in private later on!

We would like to suggest that the lovely couple ask Santa for a tape measure, so they can measure their stairs before ordering any more funiture that does not fit their home. Whilst they are writing their letter to Santa, they could also ask for a new son too!