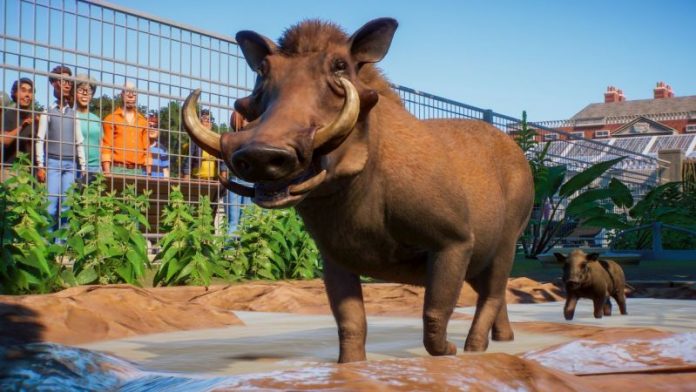 Planet Zoo is a simulation game for the PC where you can…you guessed it…build a zoo. As the natural sequel to Planet Coaster, this new game from Frontier will test your imagination and your patience.

Planet Coaster allowed you to build your own theme park, using hundreds of different blocks, rides, paths to create your own masterpiece. Planet Zoo follows the same route, but swaps the rides for a number of different animals. If you enjoyed the ‘Tycoon’ games of old, then this ‘business’ simulation is the game for you.

So how does it differ from a theme park game? Well, a lot will be quite familiar to start with if you played Planet Coaster, as you have to create some paths and add the required buildings before your visitors arrive. The new bit of the game is when you want to introduce your animals, as the difficulty suddenly increases.

You are in charge of building the habitats for each animal, so you need to have a good idea of what they need. If you haven’t got a clue between a red panda and a meerkat, then there is a zoopedia which will give you some basic information. When we said basic, we mean basic! It may give you a helping hand to understand if they are social animals and if they like the hot or the cold, but it will not tell you want barriers to use, what home to use and what entertainment thye require. So you go and build your habitat barriers and within minutes your new red pandas are escaping and scaring all your visitors. Not only that but you get charged ‘$1,000’ to gather them up, so soon you will run out of money.

This is definitely a game that you need to spend extensive time trying things out for yourself. Whilst some tasks require common sense, others are only discovered through your own mistakes. Add too many males into certain habitats and watch as your furry beasts tear themselves apart. Mixing different types of animals together in the same habitat will also lead to carnage. Don’t ask us for any suggestions as to what animals to mix together as we are still trying to work it out.

The graphics are excellent, although sometimes do lose their crispness. As Planet Zoo is a 3D game, it can get a little frustrating sometimes when you struggle to place an item where you need it. If you are not full of imaginative ideas, the game can be hard if you are not sure what to build or how some items should fit together. The business side of the game can be quite a challenge too, as you struggle to keep the bills paid whilst hiring enough staff to cover your zoo needs.

The other frustration with this game is when things start to go wrong. A little bubble will appear to inform you that something terrible has happened or your little animals are starving. This is the point you begin to wonder if it’s because you did something wrong or is it because the game is not working correctly. It’s hard to tell sometimes, as it is not always easy to find out why your keeper is having a cup of tea and not filling up the food trays. There was a bug in the early versions of the game where animals would not get fed. Gamers were adding more keepers and different food trays and the little critters were still dying. Sometimes your animals will be unhappy and you just don’t know what to do to resolve the problem. Sticking a few zebras in the lion enclosure is not going to cheer the lions up!

The other area of the game that is ‘unusual’ is the market place for animals. If you play franchise mode, you can breed your animals and then sell them to other players. This is good if you want to try and raise funds to expasnd your zoo, but very annoying if you are unable to find the animal you want to put in your zoo or if other players are charging an extortiante amount of money for it.

So it all sounds a bit negative? Not at all. Planet Zoo is a huge game and we can see you getting hundreds of hours of fun from it. There is DLC coming (Artic Pack is the first DLC) plus you can download habitats from the Steam workshop. The game is a huge amount of fun, but do not underestimate how much time you will need to invest to get even a half decent zoo to show your family.

The selection of animals on offer could be described as a little bit ‘uninspiring’. Most of the African safari animals are present, but there are no marine animals, so anyone wanting to build a fun penquin enclosure is going be disappointed. There will be some considerable frustrations along the way, but if you keep plugging away at it you will be able to build the zoo of your dreams. The game is being upgraded al lthe time and more DLC is promised, so keep an eye out if you are looking for a particular animal. You really can do whatever you want with this game and so if you have the time, you could build an amazing zoo or just stick all the animals together in one enclosure and see which one survives. Where else could you get hundreds of hours of entertainment like that for less than £40??