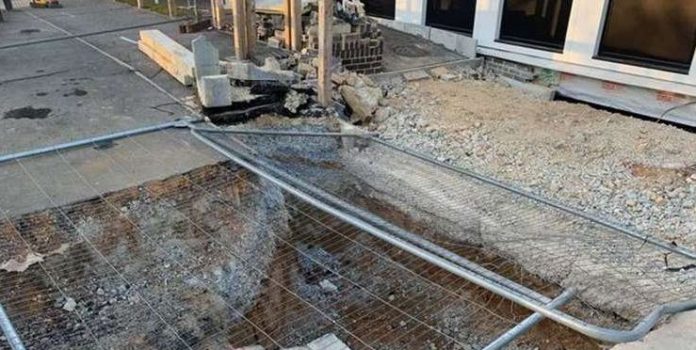 A sinkhole has opened outside a newly built assessment centre at Maidstone Hospital. It appears the hole was noticed late last week on the road just outside the Acute Assessment Unit in Hermitage Lane, Maidstone.

The area outside the Acute Assessment Unit at Maidstone Hospital has been cordoned off while experts examine a possible sinkhole. Possible? If it isn’t a ‘sinkhole’ then what could it be? A meteorite hole?

A number of patients within the unit have been moved to other areas of the hospital, but the AAU is running as normal and temporary traffic lights are in place to divert traffic from the area.

There have been a number of sinkholes appear in the Barming area, with one on the Orchard Fields site developed by Bovis Homes, prompting concerns from residents who recently purchased their homes.

In 2018, there was one on the A26 Tonbridge Road, which caused months of disruption to residents and businesses in 2018.

More recently, in September holes appeared close to water storage tanks off Hermitage Lane, another appeared in Angelica Square in November and another opened just a short distance from the hole on the Bovis site in December.

The regular appearance of sink holes has led to local MPs Helen Grant and Tracey Crouch to jointly call for a halt to housebuilding around Hermitage Lane.