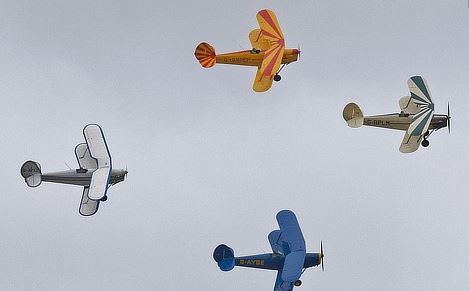 An experienced stunt pilot has been killed after his bi-plane crashed in a field near to Headcorn Aerodrome.

Angus Buchanan was an experienced member of the Stampe Formation Flying Team that perform at airshows across the UK. The accident happened about 4.30pm yesterday afternoon.

It is thought that the team were practicing maneuvers when the incident occurred, as witnesses said there were other similar aircraft in the air at the time. The plane appeared to “have performed a stall turn and lost control.”

A spokesman for Kent Police said: “At 4.25pm on Sunday, May 9th, 2021, Kent Police was notified that a light aircraft had crashed in a field near Headcorn. Officers attended along with South East Coast Ambulance Service, Kent Fire and Rescue Service and an air ambulance. A man was pronounced deceased at the scene.”

Angus Buchanan was an experienced professional pilot having learnt his skills at Preswick airport. He purchased the fabled G-AWEF from the Tiger Club in 2004. The Stampe Formation Team grew out of the Tiger Club Biplane 4 of the 70’s and 80’s and the Club moved to Headcorn in 1990. The group of 4 planes perform formation flights so that they can share their beautiful bi-planes with as many people as possible.