US Treasury Secretary Has A Go At Greta Thunberg 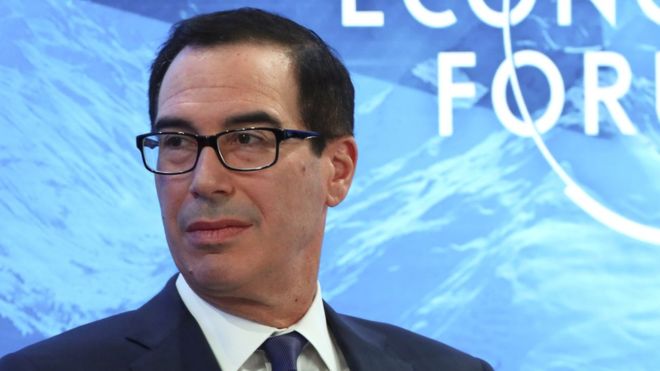 US Treasury Secretary Steven Mnuchin has laid into Enviromentalist Greta Thunberg at the recent World Economic Forum in Davos. The 57 year old senior US Official said the 17 year old activist’s call for investors to divest fossil fuels showed a lack of understanding about the economy and jobs.

Steven Munchion then added “After she goes and studies economics in college, she can come back and explain that to us”.

The every friendly Mr Munchin continued the criticism, in response to a question about Ms Thunberg’s call for fossil fuels to be scrapped, Mr Mnuchin said: “Is she the chief economist?” He added: “For people who call for divestment, there are significant economic issues – issues with jobs.”

President Donald Trump dismissed the “prophets of doom”. Mr Trump said that campaigners were too pessimistic and should concentrate their fire on countries where emissions are rising. He did not say which countries.

Since the remarks from Mr Munchin, climate experts have rallied around Greta Thunberg. “Perhaps Steve Mnuchin should go back to college and study environmental science before he enacts additional environment-destroying policies,” Ken Caldeira, an atmospheric scientist at the Carnegie Institution for Science’s Department of Global Ecology.

What Steven Munchin seems to have overlooked is that people like Greta Thunberg are not particualrly intereseted in the world economy, they are interested in saving the planet. Now whilst these two issues, go hand-in-hand, there will be no economy if the world continues to destroy itself.

Whether Mr Munchins comments were for real or for a cheap swipe at the young activist, they seem to have blown up in his face. Whether Greta comments are accurate or not, nobody really knows, but to dismiss them with such disregard has exposed Mr Munchins true colours.

His priorities may be focussed on the treasury, economy and growth, but his narrow minded view of the future and lack of understanding on how the environment will effect the economy has left Greta with the upper hand on this occasion.