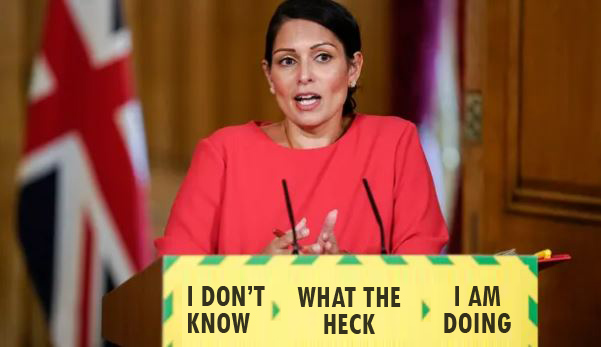 The UK Home Secretary Priti Patel announced during the government update today that new arrivals to the UK will have a 14-day quarantine imposed from 8th June. New arrivals into the UK will need to self-isolate or could face fines for any breaches.

The restrictions are aimed at preventing a second peak of the disease being introduced by travellers. Breaches would be punishable with a £1,000 fixed penalty notice in England, or prosecution with an unlimited fine.

Priti confirmed that the self-isolation would need to be based on trust, but that they could face random checks from public health authorities to ensure their compliance during the 14-day period. She confirmed that anyone arriving by air, sea or rail will be advised to use personal transport to head to their accommodation and once there not leave for 14 days.

For anyone who has managed to read this far, the first question raised was why we have to wait until 9th June? The reply from Priti was “The answer as to why we’re bringing in these measures now is simple: It is to protect that hard-won progress and prevent a devastating resurgence in a second wave of the virus,” she told the Downing Street press conference. The UK must “guard against imported cases” now the peak is passed. How do these people get these jobs?

Surely the UK should have implemented quarantine from 8th March when Coronavirus became a global pandemic. We should have been guarding against “imported cases” for the whole duration of the pandemic. We should have been protecting the UK from “imported cases” before it got to the point of a pandemic – we knew it was coming and Italy gave us good warning it was in Europe. Not only is it 3 months too late, but even now, we have to wait a further two weeks for this to begin. If they are waiting for the paperwork to be prepared, just how slow is the photocopier in Downing Street?

But that is not the only issue with this ridiculous plan. The Home Secretary is also looking at the Police and public health authorities to enforce this. Does she not realise that they have not been able to control the UK public during lockdown, let alone now having to keep track a load of foreign people. Our public health authorities are just a little stretched at the current time and I’m sure they do not need any further work. Would it not be better for them to be concentrating on helping UK citizens than running around after people from other countries?

We are also basing this whole scheme on trust! So, we are relying on trusting people from other countries to do the right thing to protect our own residents. We are not saying that all people from abroad are not trustworthy, but the point is – we don’t know. Would you leave your children with a stranger from another country? Perhaps now is not a good time to say we have trust in other countries, just take China as one prime example!

They also have to get from the airport, port or station to their accommodation. If they know someone in the UK, then they may get a lift. If they have to use public transport, then they will be putting the staff and other members of the public at risk. They will also need a lot of food for 14 days isolation. So if they do not have any support, they will have to go out to purchase food.

The fine for breaching the quarantine is only £1,000. The chances of getting caught are quite remote to start with, especially when you consider how stretched the authorities are at present. If they have a chance to go out and earn more than £1,000, then they will be quids in by not following the rules. A wealthy Chinese businessman from Wuhan coming to check on his property investments in London is not going to worry about a £1,000 fine. But you can see why this could pose a slight issue? Why is the fine only £1,000 too? Make it £5,000 or £10,000 and really give people something to consider when they roll up at Heathrow.

Also, there are some exemptions from the measure, which will be published online, but will include:
– Road haulage and freight workers
– Medical professionals travelling to help the coronavirus effort
– Anyone moving from within the common travel area covering Ireland, the Channel Island and the Isle of Man
– Seasonal agricultural workers who will self-isolate on the property they are working.

If all this seems too ludicrous to be taken seriously, do not forget the hundreds of illegal immigrants who come ashore in Kent every day. And these are the ones that the UK Border Force are collecting at sea and bringing into Dover. There are probably a lot more coming into the UK undetected. Do not forget about the ones in the back of lorries either.

The UK government has been too slow to react to the Coronavirus crisis from the outset. The news today only adds more wood to the fire of discontent. The UK should have shutdown its airports when infected people began returning from Italy during the Spring half-term. It is astounding that it has taken this long to implement a quarantine on UK shores and even more shocking that we will give people two weeks notice to enter the country before the new rules are enforced. Lockdown is virtually over in the UK, the authorities are unable to control it any longer and we will struggle to have any control over the new quarantine rules.