HomeNewsResidents On New Housing Estate Left In The Dark
News

Residents On New Housing Estate Left In The Dark 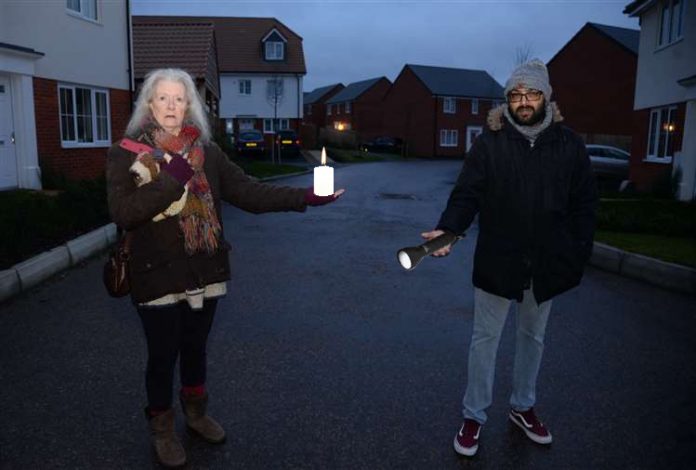 Residents on a new housing estate are accusing a developer of leaving them in the dark as there are no street lights. The new estate at Aylesham, near Canterbury, say it is dangerous to navigate the dark roads and pathways, after builder Persimmon Homes did not install lighting.

More than 80 residents have signed a petition requesting lights are installed, although the developers have said that it is an unadopted road and they have passed over the roads to a management company.

“I cannot see where I’m going” said one resident

Resident Kunal Patel said: “It’s completely unacceptable. Now that the nights have drawn in, it’s pitch black in many streets. My daughter tripped recently in the dark and cut her knee. It’s actually not safe for families.”

Another resident complained “I trod on a slug. It’s smeared all over the bottom of my shoe. I’m just thankful it wasn’t my neighbours giant snail, Colin.”

A spokesman for Persimmon Homes South East said the development had been built in accordance with approved planning consents “which did not include street lighting to any of the private roadways.”

A suggestion has been made to get all the residents together and help them to read the terms and conditions of their new house purchases. There’s a good chance that this issue would have been listed. Maybe they need to ask their solicitors why this was not brought to their attention before they signed the contract.

Other residents in Kent, who are used to living without street lighting are confused to the real issue here. They are happily living their lives, being able to see the stars and are happy without light pollution. They have offered to send an emergency care package to the Canterbury residents containing torches and candles and if they can raise enough money, they may even send some batteries and matches.