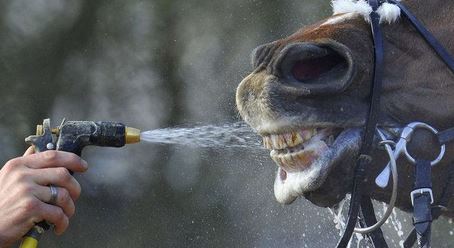 People who visited the Chelthenham Festival, which finished just over a week ago have begun to display symptoms of Coronavirus. The horse racing spectable, which attract crowds of over 250,000 ended on March 13th.

Some are now complaining that they have symptoms similar to coronavirus and are isolating at home. Two young staff who were working at the four day event developed dry coughs on the second day. Although they went home straight away, they were allowed to return after being advised by the festival’s organisers, The Jockey Club

After the event they began to feel worse and both then quarantined themselves inside their home and have since suffered with fevers and shortness of breath. They were shocked at the severity of the disease.

it’s time to take decisions away from individuals, business owners and organisers

Other attendees have taken to social media to describe how unwell they have been since being at the event. It is well known that it can take 4-5 days for the symptoms to show, which is a very long time. One person who came home to quarantine said that they only started to show signs of fever after being in quarantine for 5 days.

The government has been criticised for taking too long to react to this pandemic. Many felt that the Festival should not have been allowed to take place at all. It would seem now tha tthey were correct.

A large percentage of the public is now asking for a full lockdown across the country to stop the spread of coronavirus. It would seem that this measure will be coming at some point, so why not bring it in sooner than later. Everyone is capable of doing their own risk assessment, but sadly we will all get brought down to the level of those who take most risks. We need to raise the bar and take this decision away from those who want to take the biggest risks.